Children born before 39 weeks are more likely to experience symptoms related to ADHD, according to data published in The Journal of Pediatrics.

Co-author Nancy E. Reichman, PhD, is a professor in the neonatology division at Robert Wood Johnson Medical School at Rutgers University. Reichman told Healio that although she had long been interested in infant health, in recent years she became interested in how children develop later in life. 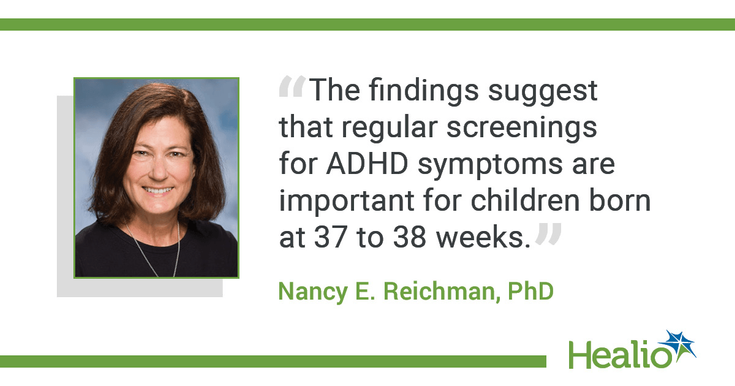 “I was involved with the data collection for the Fragile Families and Child Wellbeing study,” Reichman said. “I knew that the data were excellent for looking at linkages between prenatal or birth factors and how kids are doing later. One of the unique aspects of these data were the inclusion of teacher reports of how kids are doing, which sometimes, it could be argued, are more objective, perhaps, than maternal reports.”

Reichman and colleagues limited their study to full-term infants (born at 37 to 41 weeks) “because that is a range that has not been considered particularly at risk for adverse longer term outcomes,” she explained.

In an analysis of 1,400 children included in the aforementioned Fragile Families and Child Wellbeing study, the researchers used the survey reports of the children’s teachers at age 9, which included ratings on symptoms of hyperactivity, ADHD, oppositional behavior and cognitive problems or inattention.

Although Reichman said she and her co-authors expected there would be “a continuation of the generalized pattern between gestational age and ADHD symptoms (ie, it is known that preterm children are at risk),” she added that they were “a bit surprised with the strength of the associations within the full-term period.”

“The findings suggest that regular screenings for ADHD symptoms are important for children born at 37 to 38 weeks,” Reichman said in a press release.

She also told Healio that “the risk doesn’t just stop after 37 weeks.”

“It doesn’t mean that if you’re if your child is born at 37 or 38 weeks that they’re going to have any problems, but sometimes this group might be overlooked, and overlooked in terms of the screenings, compared to preterm kids,” Reichman said.

Read the original article on healio. Get Your Genes On: Genetic Literacy in Pediatric Primary Care
Learn More
PrevprevIdentifying and Treating Severe Hypoglycemia in Pediatric Patients with Diabetes